10 Reasons Why You Should Build Your Startup in Lisbon

There are many obvious and not so obvious reasons for Lisbon to be standing out so much right now and attracting so many entrepreneurs.

Here are a few of them that make Lisbon shine in global rankings, being in a solid 4th position when it comes to the Startup City Index according to Forbes.

1. Development’s value-for-money is higher in Lisbon

You will find that some of the greatest employees working at global IT companies are Portuguese. This is, in part, thanks to local faculties (most notably FCT-UNL and IST) churning out hundreds of great developers every year. A huge 53% of people in Lisbon between 20 and 30 are STEM graduates. This goes a long way to serve the mammoth demand for developers from local startups and tech firms. 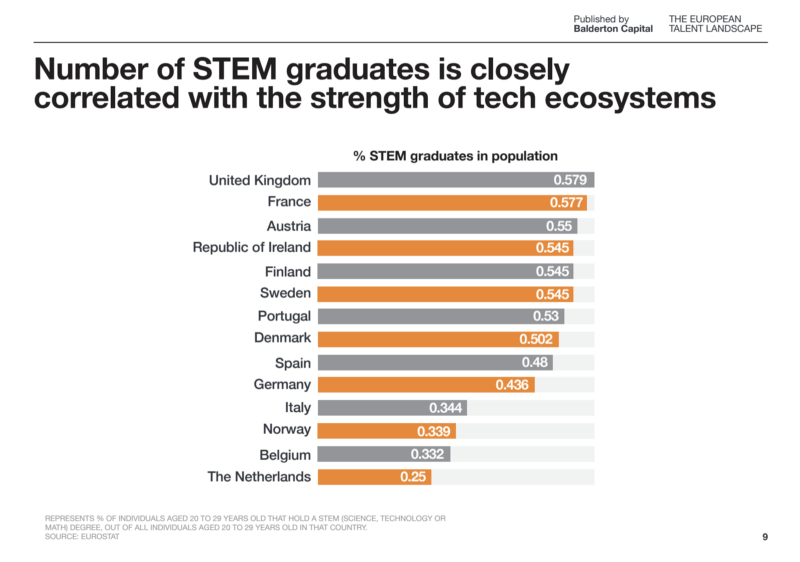 Developing in Lisbon is considerably cheaper than in London, Paris, Berlin or Zurich. Our developers are among the best, yet frequently only cost 80€ an hour. In comparison, the average developer costs a staggering 300€ an hour in Switzerland.

In the outsourcing space, specialized agencies charge around 100€/$ per talent per hour, meaning you can get a fully-fledged team of developers and data-scientists here for the same price as hiring and managing developers in London or Paris.

There is a critical mass of tech development capabilities in stacks such as Node, Angular and React. This makes a critical difference for the cutting edge startups based here.

3. Real Estate prices are 80% to 66% cheaper than in places like Zurich and Berlin

Office space costs on average 22€ per m² per month in Lisbon’s buzzing city centre based on headline price. This is considerably cheaper – over 80% less than London’s West End.

Despite the recent spike in rental and sale prices due to the Airbnbzation of the city centre, Lisbon is still an affordable city to live in. According to Numbeo, on average a one-bedroom apartment in the city centre costs around 885€ and a three-bedroom at 1,700€. This is just over 66% cheaper than comparable apartments in London, Zurich or Paris.

4. There are state of the art hubs and a giant startup centrality to come soon

Second Home opened its second venue globally in Lisbon after its first in London. However, they are not the lone contender here. There are plenty of others to choose from such as:

Arguably the most exciting thing to come is going to be Beato Creative Hub. Entrepreneurial space builder Factory, with support from Startup Lisboa, is building a giant space in Lisbon dubbed Beato Creative Hub. The hub plans to be 35,000m² in its first phase (with plans to be around 100,000m² at completion) and is already signing big names like Mercedes to its roster.

There is an endless number of communities for JavaScript, Node, Angular, RoR, Java, and many more. Have a look at the full list of networking opportunities through Meetup.

Since 2016 Lisbon has been the home city of Websummit. From 27,500 people in its 2015 edition in Dublin, it doubled to 50,000 as it reached Lisbon. Websummit’s preference for Lisbon versus Berlin or Paris is very telling about the city’s newfound heft.

7. It is a very international city

There are over 120 cities connected to Lisbon’s airport, which served a record-breaking 30 million people by the end of September 2019. The city is increasingly on the radar – particularly for short breaks, and is often ranked “the best” or “the trendiest to visit” as seen here.

8. Timezone and proximity-wise you are finely placed

We are within the same timezone as London and only one hour behind Paris, Madrid, Milan, Amsterdam, Stockholm and Zurich. What’s more, from Lisbon it is only around a 3-hour flight to any of these cities. With only a 5-hour time difference from New York.

9. English is widely spoken (as in Germany or Holland)

Here people born after 1980 have grown up watching cartoons, series and movies without dubbing but rather with simple subtitles. This means that most likely anyone under 40 will be able to communicate in English – many of them at a business fluent level.

10. Bureaucracy has had a tech revolution

Since 2005 the Portuguese government has pioneered a few e-gov initiatives and taken some of the best seen abroad. Since 2005 a single ID card replaced 5 different cards (Social Security, Health, Elector’s card, Tax Id and Regular Id.

For fiscal matters, the national Fiscal Portal is now the Nº1 invoicing cloud software where freelancers issue their invoices that automatically fill out the annual returns form. Income tax for foreigners is a mere 20%, which has attracted many independent workers.

a. Lisbon is indeed one of the prettiest cities in the world

Anyone would live happily here.

b. The food is great, the nightlife is better than ever

Our food is very Mediterranean leaning and has some great fish (grilled not fried) dishes. The new restaurant scene is booming with 7 more Michelin starred restaurants than in 2015, now 26 (a 36% increase).

On top of this, there is also the famous Time Out Market – which showcases the best selection of food and drinks that Lisbon has to offer, as well as events and cooking courses.

In terms of nightlife, Bairro Alto and Cais do Sodre’s legendary spots are getting new additions every month.

There are dozens of amazing beaches to surf, starting 20 minutes away from the city limits! The season is normally March to November. See some of them here.

There are dozens of amazing beaches to surf, starting 20 minutes away from the city limits! The beach season is long – normally March to November. See some of them here.

d. Coffee is simultaneously the cheapest and the best in Europe (on pair with Italy)

Coffee lovers have another reason love to Lisbon and Portugal. Here an espresso is not only always perfect (according to the Spanish newspaper El Pais) it is also much cheaper than the average, going for between 0,6€/0,7$ in most places to 1.2€ in the fanciest locations.

e. The weather is incredible

Lisbon boasts 2799 hours of sun per year, a whopping 99% more than London, 68% more than Paris and 72% more than Berlin according to Current Results.

In safety terms, it stays behind only the two small and isolated nations of Iceland and New Zealand. Murder rates are extremely low. Terrorism is not an issue and theft, in general, is rare. Full rankings here.

It is also a stable economy with inflation under 1% since 2013.

There are endless reasons why Lisbon is such a great city, not just for a quick getaway, but also for your business.

Entrepreneurship is abundant and the Startup scene is going from strength to strength, in a multi-cultural environment. On top of this development is much better value for money. Renting offices and apartments is cheaper and the city is the home of WebSummit.

I hope this article has helped you discover some of the amazing things Lisbon has to offer – I hope to see you here soon!

I’m the Co-Founder of Altar.io & 10kstartup - a team of experienced second time founders & world class developers and product talents based in London and Lisbon. We help startups and corporates to build great tech products.

If you have a brilliant idea that you want to bring to life - drop me a few lines in a private message and let’s chat!

Thanks for reading,
Andre

Thanks for sharing if you find this article useful.
Feel free to raise doubts or questions and also to criticise as much as you like 🙂

Developing in Lisbon is considerably cheaper than London, Paris, Berlin or Zurich. Our developers are well among the best and frequently cost 80EUR/hour versus 300 EUR/hour in Switzerland.